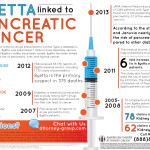 In 2012, the U.S. Food and Drug Administration (FDA) allegedly received over 38,700 adverse event reports from patients taking Byetta for type 2 diabetes, 1,700 of which include claims of acute pancreatitis. Although the medication had helped many to better manage their blood glucose levels, others are filing claims against the manufacturer, alleging that the drug caused serious and life-threatening complications. If you have been injured, contact a Tennessee Byetta lawyer for more information about filing your own Byetta lawsuit.

Between 2005 and 2008, the FDA also received reports of 30 cases of pancreatitis, 62 claims of kidney disease and 78 reports of kidney damage in type 2 diabetes patients taking Byetta. However, despite these mounting claims of complications, there were still 7 million prescriptions filled for the drug in 2008, according to court records. Additionally, court documents also indicate that the medication may have caused 375 deaths, leading many families to file for compensation on behalf of their loved ones. If you have lost a family member and you feel the death was caused by Byetta, contact a Tennessee Byetta lawyer to determine if you are eligible to pursue a claim on his or her behalf.

Byetta has been used by many type 2 diabetes patients as a way to better manage their blood sugar levels. The drug, like other incretin mimetics, works by stimulating the pancreas to produce more insulin. Common side effects of Byetta include abdominal pain, nausea and fever, yet serious and life-threatening complications include cancers of the liver, thyroid and pancreas. Plaintiffs have also allegedly suffered from kidney failure and acute pancreatitis, a condition which, if not quickly diagnosed and treated, can lead to pancreatic cancer.

Have you or someone you love taken Byetta for type 2 diabetes and you were diagnosed with pancreatitis, thyroid, liver or pancreatic cancer or you suffered from other adverse side effects? The Attorney Group for Tennessee can review your case, free of charge, and help you to determine if you have a valid claim. We will answer your questions to the best of our ability about pending cases or filing your own lawsuit and connect you with an affiliated Tennessee Byetta lawyer who will handle your claim. You may be entitled to file for compensation for lost wages, pain and suffering or medical expenses resulting from your injury.