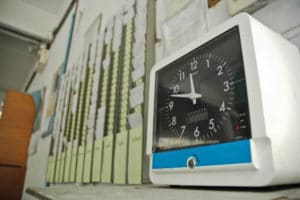 A Tennessee unpaid overtime lawsuit may be an option for hourly and salaried employees, as well as some contractors, who work beyond the standard 40-hour workweek. If an employee feels that they are not receiving the overtime pay they are due, a Tennessee unpaid wages attorney may be able to help them recover the compensation he or she deserves.

EyeOfPaul-istock-ThinkstockFor more information, contact the Attorney Group for Tennessee today. Our consultations are free, confidential and without any obligation on your part. We can help answer your questions, and if you choose to pursue a claim we can connect you with an affiliated Tennessee unpaid overtime lawsuit attorney who can assist you throughout the legal process.

Under the Fair Labor Standards Act (FLSA), overtime is defined as “time actually worked beyond a prescribed threshold.” In other words, if an eligible employee works beyond the standard workweek of 40 hours, he or she is entitled to one and one-half their regular rate of pay. Some states may have their own labor laws concerning overtime that may extend beyond the federal rules.

Under new federal guidelines, employees who make less than $913 per week ($47,476 per year) were scheduled to receive overtime benefits starting on December 1, 2016. According to the DOL, a U.S. District Court Judge for the Eastern District of Texas granted an Emergency Motion for Preliminary Injunction of the overtime rule on November 22, 2016. The injunction blocked the final rule from taking effect at the scheduled date, however, the Department of Justice filed a notice to appeal the injunction on December 1, 2016.

Do I Get Overtime If My Employer Calls Me an Independent Contractor?

According to a DOL news release published in April 2016, investigators from the DOL Wage and Hour Division found that a Nashville restaurant violated overtime provisions of the FLSA. As a result of the investigation, the restaurant and its owners were ordered to pay 44 employees a total of $175,000 in back wages and liquidated damages.

Unpaid overtime lawsuits have also been initiated against the ride-share company Uber. According to a motion filed with the Judicial Panel of Multidistrict Litigation in December 2015, at least five related actions have been filed in five federal district courts against the company. According to the motion, determinations in California and Oregon concluded that Uber drivers were employees, therefore entitled unpaid overtime wages and reimbursement of expenses based on the relationship between the company and its drivers.

Can My Employer Fire Me for Filing an Unpaid Overtime Lawsuit?

Retaliation is not limited to termination of employment. Retaliation of any kind is prohibited, including:

How a Tennessee Unpaid Overtime Lawsuit Can Help For more information, contact the Attorney Group for Tennessee. You can fill out the form on this page or contact us by phone or email.