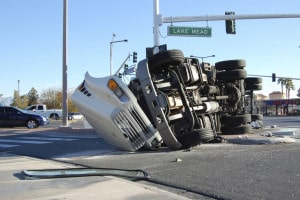 In one of the most famous trucking crashes in history, and one that has led to trucking accident lawsuits being filed, actor and comedian, Tracy Morgan, was seriously injured when the van he was riding in was struck by a semi-truck driven by a man who had traveled 700 miles from his home in Georgia just before getting behind the wheel of his truck. Another passenger in the van died in the accident in which investigators say that the Georgia truck driver had been awake for 24 hours prior to the crash and had been driving for more than 13 hours. He was also speeding at the time of the crash.

The accident involving the actor shed light on fatigued driving as well as negligence on the part of truck drivers that lead to crashes, and ultimately, trucking accident lawsuits. In addition to driving while fatigued, truck drivers sometimes ignore driving restrictions which limit the number of hours they drive. Although the Georgia man in the Morgan accident was under the 14-hour limit required under Department of Transportation regulations, his next stop was far enough away he would have been over that limit by the time he arrived. Truck drivers have also been negligent by driving in an unsafe manner in bad weather as well as distracted driving, including talking on cell phones, texting or eating behind the wheel, all of which could lead to trucking accident lawsuits.

Truck drivers are not the only ones that could be considered negligent in truck driving crashes. Trucking companies also have been accused of engaging in unsafe practices that could be considered negligent. According to lawsuits, in an effort to cut costs, maintenance schedules may be ignored or repairs that the company may consider minor may not be performed. Unreasonable deadlines could lead to drivers getting behind the wheel without enough sleep, which may be the case in the accident that injured Morgan and took the life of his friend. Some companies may hire drivers with past safety issues or who have not received adequate training. Many simply fail to follow federal and state safety regulations. There have been instances of trucking accident lawsuits when a crash occurs due to an overloaded or unsafely loaded tractor trailer.

The United States Highway Traffic Safety Administration (NHTSA) says that, in 2012, there were 104,000 people injured and 3,921 killed in accidents involving large trucks. Occupants of vehicles other than the tractor trailer represented 73 percent of the deaths, while 18 percent were truck occupants. This percentage represents an increase of nine percent from 2011 in the number of truck drivers killed while in their truck. In crashes where the driver or company was found to be negligent, trucking accident lawsuits may have been filed due to injury or death.

Being injured in a trucking accident can be frightening, while losing a loved one due to the negligence of a truck driver or trucking company can be devastating. If either of these situations pertains to you, it is possible you may be able to file a trucking accident lawsuit against either the driver, the company or both. Contact Attorney Group for Georgia to learn if you qualify for a personal injury or wrongful death lawsuit. We can answer your questions, and connect you with an affiliated attorney if you decide to pursue a claim. Contact us today to learn more.