According to the United States National Highway Traffic Safety Administration (NHTSA) there were 3,921 people killed and 104,000 people injured in 330,000 accidents involving large trucks on the nation’s highways in 2012. Of those killed, 73 percent were occupants of vehicles other than the trucks while 18 percent were the occupants of the truck. Some of these accidents were caused by the negligence of either the truck driver or the trucking company, leading to trucking accident lawsuits. 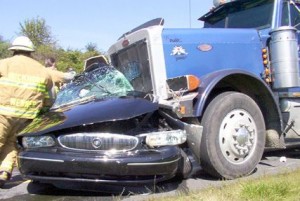 In some cases, the cause of the accident is related to negligence or carelessness of the trucking company. Trucking companies face growing competition as well as rising costs which can cause them reduce safety measures in an effort to keep expenses down. Companies may neglect to replace faulty systems in trucks or delay inspections in order to save money. In addition, companies may have unreasonable shipping scheduled that encourages drivers to remain behind the wheel more hours than permitted under federal regulations. In an effort to fill driver positions, companies may also hire drivers that are not qualified or have a past history of safety issues that could be violations of federal and state regulations. Trucks that are overloaded or not loaded properly are also the cause of accidents. When companies are found neglectful after a crash, they may be liable in personal injury or wrongful death trucking accident lawsuits.

Although there are documented cases of trucking company negligence causing accidents, drivers may also be fault in accidents that lead to trucking accident lawsuits. Drivers are often paid by the load, and deadlines to get those loads delivered quickly can lead to drivers operating their rigs in an unsafe or negligent manner. Drivers have been cited for driving in bad weather or failing to follow regulations. Driver fatigue is also a common problem among truck drivers, as well as distracted driving involving texting or talking on a cell phone. There have also been accidents caused by a truck driver under the influence of drugs or alcohol.

In 2010, an Alabama truck driver killed eleven people in an accident in Kentucky. An investigation revealed the truck driver had made a phone call just seconds he crossed the median and struck a van carrying family and friends to a wedding. Of the 11 passengers in the van, only two small children in safety seats survived. Further investigation revealed the Alabama truck driver had been talking and texting on his phone for hours leading up to the early morning accident. In addition to the casualties in the van, the truck driver also died.

Injured in a Trucking Accident?

If you have been injured in an accident involving a large truck, or if a loved one has died from injuries received in a trucking accident, you may be eligible to file a personal injury or wrongful death trucking accident lawsuit. Contact Attorney Group for Alabama for a free consultation to determine your options. Our consultations are free and without obligation, and if you have a case we can connect you with an affiliated Alabama truck accident attorney who can file a lawsuit on your behalf and help you recover the compensation you deserve.