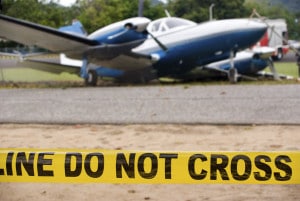 It was before dawn on a Sunday morning a few years ago that a jet airliner began its take-off from Blue Grass Airport, serving Lexington, Kentucky. Then something went terribly wrong. The flight ended in a mass of smoke and burning wreckage, with the crash killing dozens. The first issue to be raised after such a tragedy is why it occurred. For the survivors and families of the victims, however, an equally important issue is who is legally responsible and thus liable for damages. It is in such cases that a Kentucky airplane accident lawyer can play a vital role.

Statistically speaking, flying in a commercial airliner is one of the safest forms of transportation. However, a single airline crash can be far more devastating in terms of casualties than any vehicle accident. Those who survive a crash often suffer from horrendous injuries, including burns and multiple fractures. Accidents involving general aviation aircraft, including those owned by individuals or businesses or used in air taxi operations, are far more prevalent, claiming hundreds of lives every year in the U.S. Whether the accidents involve commercial or general aviation aircraft, the victims and their families may be entitled to monetary damages, and one way of seeking such compensation is through the services of a Kentucky airplane accident lawyer.

An airplane crash often results from a combination of factors that come together at the most inopportune time, and it often takes the work of a Kentucky airplane accident lawyer to determine who is responsible for damages. In the case of the crash at Lexington, the pilots mistakenly took off on a runway that was too short for the size of the aircraft. Under the circumstances, the airline most likely would be legally responsible for the actions of its employees. However, the federal inquiry also found inadequacies in air traffic control procedures pertaining to take-off clearances. These procedures could therefore be considered a contributing factor. Working with information provided by accident investigators, a Kentucky airplane accident lawyer can get to the bottom of an accident to find out how it occurred and who can be subject to legal action.

The complexity of accidents helps to explain why aviation law can itself be so complex, but there are other reasons. Aviation is an international industry, and aircrafts and their components are often produced in different countries. In the case of an accident that results from a technical failure, it will be necessary to determine what component malfunctioned and under what jurisdiction action can be taken against the manufacturer. There may also be issues of product liability and negligence. It takes the dedication and diligence of a Kentucky airplane accident lawyer to sort out these issues. A Kentucky airplane accident lawyer will also utilize the governing state, federal and international laws in seeking the financial damages that are appropriate to the case.

There are other obstacles that may arise when seeking compensation for the victims of air crashes. Insurance companies may attempt to limit the award being sought on various legal grounds. This is especially true in the case of those involved in general aviation accidents. Under the circumstances, a Kentucky airplane accident lawyer can be the best advocate for the victims and their families.

Compensation can be sought by a Kentucky airplane accident lawyer for many reasons. Even those with insurance may have to deal with significant medical expenditures. Those who are injured in an airplane crash and are unable to work will also need financial assistance in providing for themselves and their families. Additionally, damages can be sought for the pain and suffering related to the injuries suffered, and for the grief experienced by those who have lost family members in a crash. A Kentucky airplane accident lawyer can help these individuals obtain the compensation that they deserve.

Those who have suffered injuries or lost relatives in air crashes can contact Attorney Group for Kentucky for help with questions victims may have, and to determine whether they have a valid claim. Attorney Group for Kentucky can also connect victims with an affiliated Kentucky airplane accident lawyer, all at no upfront cost to them. We are here to help, so contact us today to get a better understanding of your legal rights.