According to a report at Kentucky.com, two United States Senators are calling for a nationwide recall of vehicles with airbags manufactured by Takata Corporation. Airbag recall attorneys note that the senators are questioning why the recall has been limited to only certain areas of the country. Reports link airbag inflators manufactured by Takata to ruptures that can cause vehicle occupants to be sprayed with metal and plastic debris flying at high speeds. At least four people have reportedly died and others injured by the allegedly faulty airbags, according to airbag recall attorney firms.

If you have been injured by debris in an airbag explosion, or if a loved one has died after an airbag deployed, contact Attorney Group for Kentucky today for more information. 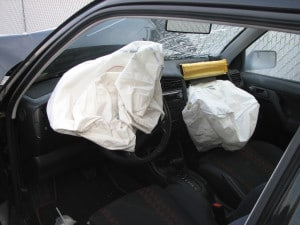 Automakers claim the problem with the airbags has been concentrated in areas prone to high-humidity, and Takata says the recall only needs to be conducted in those areas. Currently, the recall includes vehicles registered in Florida, Hawaii, Puerto Rico and the U.S. Virgin Islands, which are areas with high “absolute” humidity. Some automakers have expanded their recall to include additional states, but it has not been expanded to all states exposed to high humidity, such as Kentucky.

Another problem lawmakers see is that there are many retirees whose primary residence may be in a northern state with low humidity but who might spend summers in southern states, such as Kentucky, that have higher humidity. Their cars may not be registered in the warmer state, so they may not receive notice of the recall and could be at risk of injury or death if their airbag deploys in an accident.

There are reports that Takata has been aware of the airbag problem since 2003, and in 2009, Honda, along with Takata, settled a lawsuit brought by a woman who had been severely injured by an airbag. In 2013, Honda and Takata also settled with the family of a woman who bled to death in front of her children after debris from an airbag allegedly cut arteries in her throat.

Takata has admitted they are unsure what makes and models of vehicle have the allegedly faulty airbags. A plant owned by Takata in Mexico was reportedly found to have a defective part rate of six to eight times more than allowed by the NHTSA, and some of the components in an investigation were allegedly found to have rust and even chewing gum inside. Dealerships have reported problems getting parts from Takata in order to repair the airbags, prompting Toyota to instruct dealers to deactivate the passenger side airbag and place “Do Not Sit Here” labels on the dash temporarily.

Takata airbag injuries can be severe and deadly based on reports and allegations in Takata airbag lawsuits. If you have been injured by debris in an airbag explosion, or if a loved one has died after an airbag deployed, contact Attorney Group for Kentucky today. Your consultation is free and you are under no obligation.