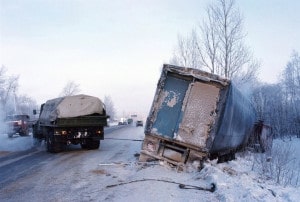 A limousine carrying famed actor Tracy Morgan and three other comedians was struck by a Wal-Mart semi truck driver in June 2014, resulting in the injury of three individuals and the death of one more. While the official cause has yet to be determined, recent reports have stated that distracted driving may have been to blame.

According to officials, the semi truck driver had not slept for 24 hours prior to the collision, a violation of the Federal Motor Carrier Safety Administration’s recent semi truck safety regulations. Apparently, the driver of the commercial Wal-Mart truck dozed or did not have the adequate reaction time to begin braking well enough in advance to avoid hitting cars that had slowed down in front of him.

The driver then allegedly made a sharp turn out of the lane and hit Morgan’s limousine. According to a Wal-Mart spokesperson, the semi truck driver had been following the company’s hours of service regulations; Wal-Mart stated that it had checked its electronic timekeeping and tracking devices as a result of the accident.

The FMCSA recently released findings from a study of electronic-hours-of-service recorders. The agency found that semi trucks equipped with the technology to log and keep track of drivers’ hours had 53 percent fewer violations and a 49 percent lower rate of violations involving non-driving-related hours of service. The report comes on the tail of new semi truck safety regulations released by the FMCSA in June 2013 that state that:

If you or someone you love has been involved in a Florida semi truck accident and you believe that you should be able to seek damages for your condition, contact Attorney Group for Florida today for more information. We can help answer your questions and connect you with an affiliated attorney in Florida who can assist you throughout the filing process.