New reports from Johns Hopkins indicate that power morcellation for hysterectomy may spread more than cancer cells. Researchers found that several women suffered from benign uterine diseases being spread throughout their body after the procedure.

Power morcellators allow doctors to cut up fibroids or the uterus itself through a small incision in the abdomen. The small pieces can then be removed through the incision, allowing for shorter recovery times and reduced risk of infection. However, recent reports have found evidence that morcellation can cause uterine cancers to be spread throughout the body. New evidence shows that other uterine diseases can also be spread using the device, including endometriosis. In at least three women, additional surgeries were necessary to resolve issues caused by the spread of either benign or cancerous conditions. 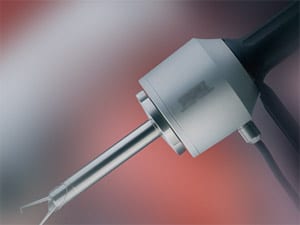 A report published in the January 2015 issue of Obstetrics and Gynecology, three doctors from the Kelly Gynecologic Oncology Service at Johns Hopkins Hospital found that three patients who underwent power morcellation for hysterectomy were subsequently required to have additional surgeries because of diseases spread to other parts of their body. One patient suffered from multiple soft tissue tumors that then required the doctor to remove parts of her spleen, colon, diaphragm, omentum, ureters and left ovary. A second patient was found to have a 15-cm abdominal mass that required resection of her bladder, colon, omentum, ureters, left ovary and fallopian tube. The third patient was found to have a bowel obstruction and pelvic mass. Her right ovaries and fallopian tubes were removed. In addition, she required lysis of adhesions in her abdomen.

In November, the United States Food and Drug Administration (FDA) required a black box warning that power morcellator for hysterectomy could result in the spread of undiagnosed cancer. It also recommended that the device not be used on women with fibroids as the growths often contain undetected cancer. The researchers who published the Johns Hopkins report urge gynecologists to do a thorough preoperative workup on patients to rule out malignancy or other diseases that could spread throughout the body before using the devices.

Have You Become Ill After A Power Morcellation for Hysterectomy?

If you or a loved one has been diagnosed with cancer or another diseases after a doctor used a power morcillator for hysterectomy, you may be eligible for a product liability lawsuit. Contact the American Injury Attorney group today for an analysis of your case. If we believe you have a legitimate claim, of our affiliated attorneys can help you get a monetary compensation for your loss.