An Uber accident lawyer may be an option for people who have been injured through no fault of their own as a result of an automobile accident involving the rideshare company. Rideshare companies such as Uber have become a popular form of transportation for people who are looking for a low cost, low hassle way of getting around town. Despite the company’s popularity, Uber has been criticized for its handling of accidents involving its drivers. People who have been injured as a result of an accident involving an Uber car may be eligible for compensation with the assistance of a car accident attorney.

For more information, contact Attorney Group today. Our consultations are free, confidential and without any obligation on your part. We can help answer your questions, and if you choose to pursue a claim we can connect you with an affiliated Uber accident lawyer who can assist you throughout the legal process.

Have You Seen an Uber Accident Lawyer Commercial?

You may have seen an Uber accident commercial on television and wondered whether you or a loved one have been affected by the negligence of an Uber driver and, if so, whether you are eligible to pursue a claim against the Uber driver or others. The purpose of this article is to provide you with additional information so that you have a better understanding of your options.

Uber is a transportation networking company based in San Francisco, California. Founded in 2009 under the name “UberCab,” the company works somewhat like a traditional cab service. Using a smartphone or other mobile device, customers submit a trip request through the Uber mobile app to drivers who use their own cars. Once the request is made, the driver picks up the passenger and takes them to their destination. Transactions are made with credit or debit cards only. Uber and its drivers do not accept cash.

Depending on location, the app allows passengers to select from the following types of Uber cars:

Uber’s services are available in over 66 countries and 481 cities worldwide as of May 2016. In December 2015, Uber announced it had completed its one billionth ride, and with over 400,000 people driving for the company each month, the service has become a popular alternative to taxis and other forms of public transportation.

Who Drives for Uber?

Drivers who work for Uber must meet certain requirements before they can begin taking fares. While requirements may change based on location, drivers must be at least 21 years old, own a car that is year model 2005 or newer, pass a background check, and have a personal license and registration. Drivers are considered to be independent contractors and may choose their own working hours. Some drivers for Uber have filed unpaid overtime lawsuits against the company seeking compensation for various claimed wage law violations.

What Kinds of Car Insurance Do Uber Drivers Have?

Uber requires some form of car insurance for all drivers, however, the type of insurance varies based on the type of service the driver intends to provide and what kind of vehicle they will use. As of March 2016, Uber’s insurance coverage for ridesharing in the U.S. and Puerto Rico includes:

There are a number of reasons an automobile accident may occur. Most fatal car crashes in the U.S. are caused by a driver’s failure to keep in their proper lane, failure to yield right of way, and reckless or careless driving. As the use of cellphones and mobile devices has increased, more people have been using such devices while driving.

Distracted driving, any activity that may divert a driver’s attention away from driving, can potentially increase the chance of having a car accident. This includes the use of cell phones, mobile devices, and in-vehicle technologies, including navigation systems used by Uber drivers.

Common types of injuries sustained in automobile accidents include:

Accidents involving pedestrians may result in damages to legs, feet and toes as well as other injuries. Likewise, motorcyclists may be subject to more serious injuries as a result of a collision with an automobile. In addition to physical injuries, people who are involved in car accidents may also suffer from emotional and psychological distress, leading to post-traumatic stress disorder, loss of a loved one, and other psychological injuries.

Has There Been an Uber Accident Lawsuit? 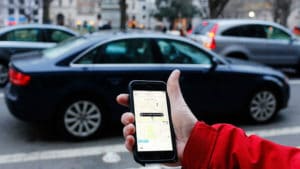 In an Uber accident lawsuit filed in January 2014, the family of a six-year old girl who was killed in a crosswalk by an UberX driver on New Year’s Eve 2013 sought to seek damages resulting from the accident. According to the lawsuit, a woman and her two children were walking home on December 31, 2013. As they walked across the street in the crosswalk, a vehicle driven by an Uber driver turned and collided with the family. The lawsuit claimed that the collision caused the wrongful death of the six-year old, as well as serious and significant physical and mental injuries to other members of the little girl’s family.

Because drivers must use and monitor the Uber software while driving, the lawsuit claims that the driver’s use and monitoring of the mobile app and its interface caused the driver to become distracted, leading to the accident. Based on information contained in the lawsuit regarding the design of the Uber app and interface, drivers were required to use the app in such a way as to violate the law.

Has There Been an Uber Settlement?

According to NBCnews.com, the family of the six-year old was awarded an undisclosed amount of money from the company. Uber had initially argued that because the driver was not driving any Uber passengers at the time of the accident, the company was not at fault. The lawsuit claimed that, as a result of the negligence of Uber in their development, implementation, and subsequent use of the app while drivers operated their vehicles, the plaintiffs suffered great loss and harm, including funeral and burial expenses, loss of love, and companionship.

Who is Responsible Should an Uber Accident Occur?

Because Uber drivers are often classified as independent contractors, those who have been injured in an accident involving an Uber car may have trouble determining who is liable in the case of an accident if one should occur. In the case of the six-year old who died as a result of an Uber accident, the company had initially claimed that it was not responsible for the driver’s actions because he was not carrying a passenger at the time and, therefore, not working for Uber when the accident occurred.

According to an article published in April 2016 in the San Francisco Chronicle, as a result of the settled lawsuit, rideshare companies in California are now required to provide insurance coverage for drivers who have accepted a ride. Although state courts have yet to decide whether rideshare companies such as Uber are responsible for injuries caused by their drivers, California law, as interpreted by the court in other cases, could determine that an Uber driver is actually an employee for negligent purposes, the website reported.

Has There Been an Uber Class Action?

In addition to Uber accident lawsuits, Uber drivers have filed lawsuits against the company claiming that they have been misclassified as independent contractors. According to an action placed with the Judicial Panel of Multidistrict Litigation in December 2015, at least five related motions have been brought forth in five federal district courts against Uber. These actions make similar claims concerning Uber’s misclassification of drivers as independent contractors, failure to pay gratuities, and violation of other state labor and common laws.

In April 2016, Uber announced that they had reached settlements in two class action lawsuits in California and Massachusetts. As part of the settlement, drivers will remain independent contractors, and Uber must pay $84 million to the plaintiffs and provide drivers with more information about reasons for deactivation. Additionally, Uber has said that they will work with drivers in those states to create a driver’s association to discuss issues that matter to their drivers.

How an Uber Accident Lawyer Can Help Uber and Uber drivers have a duty to provide a safe environment for its passengers, drivers, other commuters, and pedestrians. If there are risks of harm associated with Uber and its drivers, the company must also provide adequate warnings and safeguards. If an Uber driver fails to fulfill this duty, they, as well as the company, could be held liable in lawsuits for injuries that may result.

People injured as a result of a car accident involving an Uber car through no fault of their own may be eligible to recover money for:

The families of those who have died in Uber car accidents may be eligible to recover money for funeral expenses and the pain that comes with losing a loved one.

For more information, contact Attorney Group. After you contact us, an attorney will follow up to answer questions that you might have. There is no cost or obligation to speak with us, and any information you provide will be kept confidential. Please note that the law limits the time you have to pursue a claim or file a lawsuit for an injury. If you think you have a case, you should not delay taking action.