Note: Our affiliated attorneys are not currently taking Tobacco cases. However, there is litigation surrounding E-Cigarettes. Contact us for more information and to speak with an attorney.

If you have been injured or have lost a loved one due to the harmful effects of e-cigarettes, contact Attorney Group for more information about your options.

We offer free, confidential, no obligation consultations. If you wish to pursue a claim, we can connect you with a tobacco lawsuit attorney who can file a lawsuit on your behalf.

For more than 50 years, tobacco users, their families and government entities have been filing lawsuits against tobacco companies due to the products’ connection with various types of cancer and other diseases.

A tobacco lawsuit may be an option for people who smoked cigarettes and other tobacco products and developed lung cancer or chronic obstructive pulmonary disease (COPD). Since the 1950s, doctors and other medical professionals have linked cigarettes and smoking to lung cancer and other diseases, such as heart disease. Although scientific evidence has suggested a link between cigarettes and lung cancer for many years, tobacco companies continually fought lawsuits brought against them. Affected individuals and their families may be able to pursue compensation with the help of a product liability attorney.

For more information, contact Attorney Group. We offer free, confidential, no obligation consultations. We can help answer your questions, and if you choose to pursue a case we can connect you with an affiliated tobacco lawsuit attorney who can assist you throughout the legal process.

Have You Seen a Tobacco Lawsuit Commercial?

You may have seen a tobacco lawsuit commercial on television and wondered whether you or a loved one have been affected by cigarettes and smoking and, if so, whether you are eligible to pursue a claim against the manufacturer or others. The purpose of this article is to provide you with additional information so that you have a better understanding of your options. 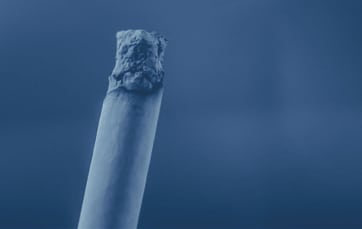 Cigarettes and Other Tobacco Products

Cigarettes and other tobacco products are regulated by the U.S. Food and Drug Administration (FDA) under the Family Smoking and Prevention Control Act, a federal statute passed by the United States Congress in 2009. Prior to FDA regulation, tobacco products were primarily controlled by individual states and congressional regulation.

Key statistics and facts regarding the use of cigarettes in the U.S., according to the Centers for Disease Control and Prevention (CDC) and the U.S. Department of Health and Human Services include:

Total economic cost of smoking is more than $300 billion per year, including $170 billion in direct medical care costs for adults and more than $156 billion in lost productivity due to premature death and secondhand smoke exposure

There are a number of risks associated with and linked to cigarette smoking. According to the CDC, tobacco use leads to disease and disability and is the leading cause of preventable death in the United States.

In a report published by the U.S. Department of Health and Human Services, cigarette smoking is reportedly responsible for nearly 6 million deaths worldwide.

In the United States, more than 480,000 people die each year from cigarette smoking, including more than 41,000 deaths from exposure to secondhand smoke. Likewise, smoking causes more deaths each year than HIV, illegal drug use, alcohol use, motor vehicle injuries and firearm-related incidents combined.

Cigarette smoking can cause cancer almost anywhere in the body, including:

According to the CDC, cigarette smoking is the number one risk factor for lung cancer and is linked to approximately 80 to 90 percent of lung cancers in the United States. Additionally, people who smoke cigarettes are 15 to 30 times more likely to get lung cancer or die from lung cancer than people who do not smoke.

Smoking has the potential to harm every organ of the body, affecting a person’s overall health. According to the CDC, other serious health risks linked to cigarettes and smoking include:

Smokers are at greater risk for diseases that affect the heart and blood vessels as well as the lungs. Cigarette smoking is the cause of most cases of lung cancer as well as lung diseases related to smoking, including COPD, emphysema and chronic bronchitis.

Exposure to secondhand smoke has the potential to adversely affect nonsmokers, possibly leading to a number of diseases and other health complications, including heart disease, stroke, increased risk of heart attack, lung cancer and sudden infant death syndrome (SIDS).

Additionally, studies have shown that secondhand smoke can cause serious health problems in children. Children whose parents smoke are more likely to get sick more often, experience wheezing and coughing more often, have an asthma attack (as well as more freuquent attacks), and get more ear infections.

Has There Been a Tobacco Recall?

Like many consumer products, cigarettes and other tobacco products are subject to recall. According to the CDC, Philip Morris U.S.A. announced a voluntary recall of 36 cigarette product lines in May 1995. Approximately 8 billion cigarettes were recalled because the company detected unusual tastes and peculiar odors during production and identified methyl isothiocyanate (MITC), a poisonous chemical that may cause severe eye, respiratory, and skin irritation as well as pain, vomiting, and blindness. Recalled cigarettes were manufactured between May 13, 1995 and May 22, 1995.

Although not an official recall, the FDA used its regulatory authority to pull four types of cigarettes manufactured by R.J. Reynolds from the market in 2015. In a press release published by the FDA in September 2015, the agency issued orders to stop the sale and distribution of the cigarettes because the products were found to have different characteristics than previous products.

The decision to pull the cigarettes was based on scientific evidence, including “a failure to demonstrate that increased yields of harmful or potentially harmful constituents, higher levels of menthol, and/or the addition of new ingredients in the currently marketed products — when compared to the predicate products — do not raise different questions of public health,” according to the press release.

Even if there had not been a tobacco recall, lawsuits have claimed that the product manufacturers failed to disclose or downplayed the known side effects related to the use of cigarettes and smoking, and that patients suffered damages as a result.

Failure to warn of side effects or other adverse health risks associated with the product can be a basis of product liability, regardless of whether the drug has been recalled.

Is There a Tobacco Class Action?

In 1998, the Attorneys General of 46 states and four of the largest tobacco companies agreed to settle cases in which those states claimed cigarettes contributed to adverse health problems that led to significant costs for their state public health systems. This agreement became known as the Tobacco Master Settlement agreement.

As a result of the settlement, tobacco companies agreed to stop engaging in certain advertising practices, such as ad campaigns aimed at minors and children, and make annual payments to the states involved to fund anti-smoking campaigns and public health programs, including a minimum of $206 billion over the first 25 years.

Other settlements have been reached as well, including a $45 million settlement after a class action lawsuit was filed against Philip Morris USA Inc. claiming that the company’s Marlboro Lights and Marlboro Ultra Lights cigarettes were deceptively advertised, marketed and sold as healthier alternatives to regular or full-flavor cigarettes.

For more than 50 years, smokers, their families and government entities have been filing lawsuits against tobacco companies. According to the Public Health Law Center, few lawsuits were successful in the beginning, as most lawsuits were filed on behalf individual smokers and their families and aggressively denied by big tobacco companies. Early cases were filed using the theories of negligence, breach of warranty and misrepresentation.

Tobacco litigation reemerged in the 1980s and 90s when plaintiffs began filing lawsuits claiming that big tobacco companies knew cigarette smoking caused lung cancer and that cigarettes were addictive. In most cases, tobacco companies argued that smokers knowingly assumed the risks associated with smoking. Tobacco companies were largely successful in defending these lawsuits.

Other lawsuits have focused on the use of “light” and “ultra light” cigarettes. Plaintiffs in these cases have claimed that tobacco companies advertise these types of cigarettes as a safer alternative to regular, full flavor cigarettes, when they are not.

How a Tobacco Lawsuit Can Help

Product makers have a duty to provide safe products. If there are risks of harm associated with their products, they also must provide adequate warnings. If a product maker fails to fulfill this duty, it could be held liable in lawsuits for injuries that may result.