Carolina Panthers quarterback Cam Newton was injured Tuesday in a car accident when the truck he was driving collided with a sedan in Charlotte, N.C.

The two-time Pro Bowler was driving South on Church Street when the driver of the sedan, who was traveling on Hill Street near its intersection with Church, hit the truck that Cam Newton was driving. The violent car accident sent Cam Newton’s truck flipping end over end until it came to rest.

Witnesses who saw the car accident said Cam Newton was dazed and in pain but alert, according to the Charlotte Observer. Cam Newton was taken to the Carolinas Medical Center and was released Wednesday, hospital officials said.

Cam Newton, who was a round 1, number 1 draft pick in 2011 and a 2010 Heisman Trophy winner while at Auburn, was reported to have broken two bones in his low 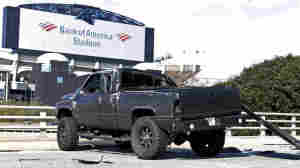 er back called transverse processes. Dallas Cowboys quarterback Tony Romo had a similar injury earlier this season and missed one game. Romo’s injury was a result of contact on the field, not a car accident.

Carolina officials and physicians were not clear about Cam Newton’s long-term status but said that he did not suffer any other injuries as a result of the car accident. They did not say if Cam Newton would start when the Panthers play the Tampa Bay Buccaneers on Sunday, Dec. 14.

Police said the driver of the sedan that collided with Cam Newton’s truck is Nestor Pellot Jr. Police said Pellot, who was driving a Buick with Georgia temporary tags, also was injured in the crash. He was treated at a local hospital and released, police said.

Neither driver was cited in the car accident, although witnesses said Nestor appeared to pull out in front of Cam Newton. Newton had been cited once for speeding during his four years with the Carolina Panthers. According to the Observer, Newton received several driving citations during his college years. He paid fines in many of those cases, the newspaper reported.

Have You Been Injured in a Car Accident?