West Virginia Water Crisis Attorneys note an abbreviated press conference given by Freedom Industries president Gary Southern at 5:30 pm eastern time in the wake of the West Virginia Chemical Spill. Little additional information was provided at the press conference than what had previously been disclosed by the company in a press release, which stated among other things that: 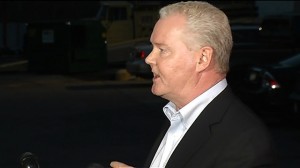 At this point, Freedom Industries is still working to determine the amount of 4-methylcyclohexanemethanol, or Crude MCHM, a chemical used in processing coal, that has been released, as the first priority was safety, containment and cleanup.

Freedom Industries is in the process of setting up an Incident Command Center on site. As more factual information is made available, we will keep you updated.

Mr. Southern noted that Freedom Industries had become aware of the spill at approximately 10:30 am on January 9. He appeared to have difficulty answering questions and a one point was given bottled water to drink. Approximately 15 minutes into the press conference, Mr. Southern attempted to conclude questioning by noting that he had had a very long day. At that point a reporter noted that the people of West Virginia and members of the media had likewise had a very long day, were going without water, and had a long list of questions they wanted answered. After attempting to answer a couple of additional questions, Mr. Southern was apparently ushered away by Freedom Industries PR representatives.

Whereas companies responsible for environmental catastrophes often represent their commitment to right the damage they have caused, individuals affected by corporate negligence such as the West Virginia Chemical Spill are encouraged to hire attorneys to assist them in recovering the compensation they deserve from the at fault parties.

If the West Virginia Chemical Spill has impacted your business, contact Attorney Group today. We will review your case and, if you have a valid claim, can connect you with a chemical spill and contamination attorney who can assist you in pursuing a claim against the responsible parties. All initial consultations are free and no-obligation. Certain factors may limit the time you have to bring a claim, so contact Attorney Group today.