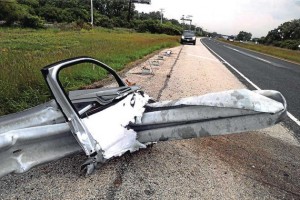 Trinity Industries has been found liable for defrauding the Federal Highway Administration after the agency found that Trinity neglected to report several possibly dangerous changes to its guardrail design. In October 2014, the FHA requested the results of several crash tests in an attempt to determine whether Trinity’s guardrail design was potentially defective and at risk of slicing through vehicles.

However, as reported in a Nov. 12, 2014, article in the New York Times, the FHA has approved the guardrail unit manufactured by Trinity even as lawyers, lawmakers, and federal officials have raised concerns. Trinity’s ET-Plus is banned in more than 30 states, and the company has reportedly ceased selling the product until it can complete its testing.

According to the FHA, there are an estimated 200,000 guardrail units designed by Trinity throughout the U.S., although that figure may be slightly higher because several states do not keep complete inventories of these systems. On Nov. 12, 2014, the FHA stated that it would observe Trinity’s crash tests that are scheduled to occur between November 2014 and January 2015.

The guard rail design works by collapsing when it is struck head-on, thus absorbing the impact of the crash and moving the rail out of the path of the vehicle. In theory, the end terminals or the rail heads are designed to slide along and push the guardrail to the side. However, Trinity’s guardrail design narrowed the channel behind the head, thus allegedly increasing the risk that the head would jam. Should this happen, the rail may pierce the vehicle.

A lawsuit was filed on behalf of a plaintiff who claimed that [inlinetweet prefix=”” tweeter=”” suffix=””]Trinity made changes to its design in 2005 but failed to inform the FHA for at least seven years[/inlinetweet], despite requirements that such changes should be reported immediately. The jury returned a $175 million fraud verdict against the company, which will subsequently be tripled under U.S. federal law.

Have You Been Injured As a Result of a Faulty Guardrail?

If you or someone you love has been injured in an accident and you believe that the guardrail design was to blame, please contact Attorney Group to learn more about your options. We can review your case with no out-of-pocket expense, and if we find that you are entitled to recover damages for your injuries, we can put you in touch with an affiliated attorney who can file your lawsuit on your behalf. You may be eligible to seek compensation for lost wages, pain and suffering, and more.