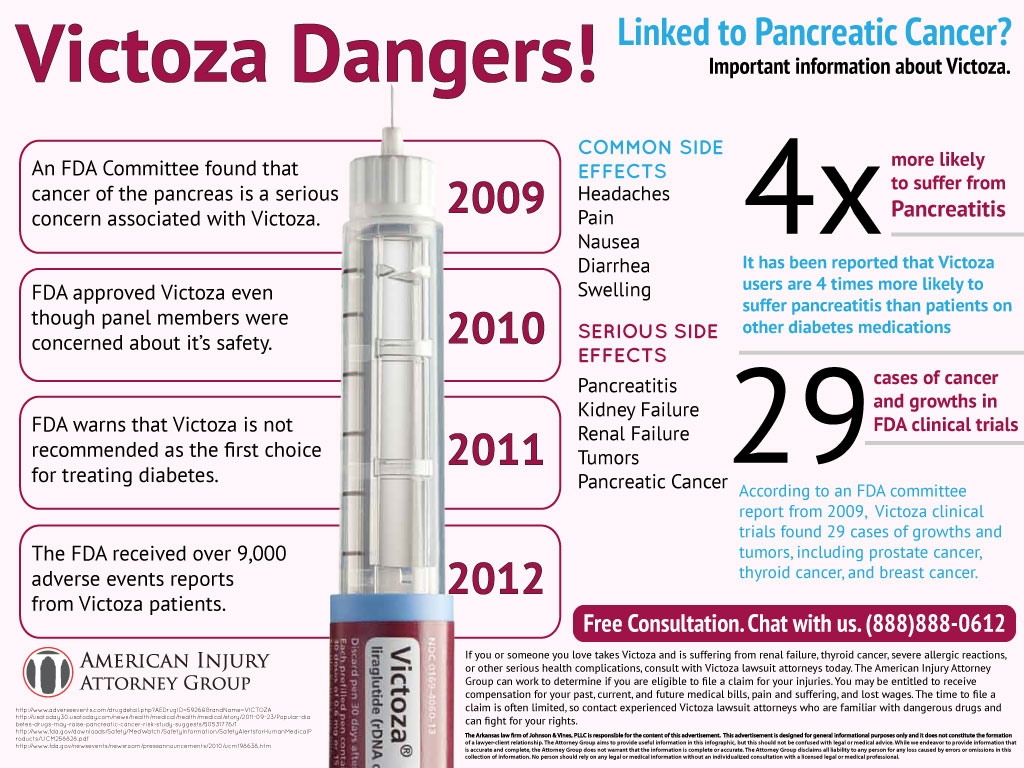 Victoza, approved by the U.S. Drug Administration (FDA) belongs to a class of mediations known as incretin mimetics. These drugs, prescribed to patients with type 2 diabetes, include other well-known medications such as Januvia, Janumet and Byetta.

Unfortunately, it has been reported that patients taking Victoza are four times more likely to develop pancreatitis than users taking other medications for type 2 diabetes. In fact, clinical trials of Victoza found 29 separate cases of tumors and growths, including breast cancer, thyroid cancer and prostate cancer, according to an FDA committee report from 2009.

In 2009, an FDA Committee concluded that pancreatic cancer is one of several reported dangers of Victoza. According to court documents, the FDA approved Victoza, despite mounting concerns from its own panel members in 2010. The following year, the FDA released a statement acknowledging that Victoza may not be recommended as the most effective drug for those with type 2 diabetes. In 2012, the agency reportedly received over 9,000 adverse event reports from users taking Victoza.

According to these adverse event reports submitted to the FDA, some of the reported dangers of Victoza and common side effects of the medication include diarrhea, nausea, headaches, swelling and pain. However, plaintiffs currently filing lawsuits against the drug’s manufacturer allege that the medication caused serious and severe side effects, including pancreatic cancer, thyroid cancer, renal failure, kidney failure, tumors and acute pancreatitis, among other complications.

Plaintiffs across the country are currently seeking compensation for these side effects and conditions. However, those who are considering filing a lawsuit to recover damages are urged to act quickly as the time to file is often limited. If you fail to file within this timeframe, known as the statute of limitations, you may lose your right to recover compensation for your injuries forever.

Have Concerns about the Reported Dangers of Victoza?

If you or someone you love have been injured or if you are suffering from serious health complications and you have questions regarding the legal actions that can be taken as a result of your Victoza treatment, contact Attorney Group today. We will address your concerns about the reported dangers of Victoza and provide you with a free case evaluation to help you to determine if you have a valid claim. You may be entitled to receive compensation for lost wages, pain and suffering and for your past, present and future medical bills.