Honda Motor Co. and Takata Corp. were named as defendants in the latest of what appears to be a growing litigation against the companies regarding their potentially defective airbags.

Reuters reported that the Nov. 17 lawsuit was filed on behalf of a Florida woman who was killed allegedly as a result of the airbags. It was the latest issue for the manufacturers as the companies continue to recall millions of cars for the faulty part.

The decedent’s family filed the wrongful death lawsuit in Orange County. They claim that the woman died three days after her 2001 Honda Accord was involved in a collision and the airbag exploded. [inlinetweet prefix=”null” tweeter=”null” suffix=”null”]According to a medical examiner, the woman suffered from “stab-type wounds” from shrapnel that was released by the airbag[/inlinetweet] and that ultimately contributed to her death. The death was initially investigated as a homicide. 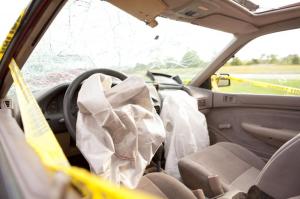 According to a spokesman for Honda, the company had not yet seen the lawsuit and could not comment. Honda is urging all owners of recalled vehicles to visit their local dealers to have the problem corrected. A spokesman for Takata also declined to comment.

The Takata airbags are the subject of a U.S. safety investigation that began in early 2014 because of the risk that they could explode in a car crash, spraying metal shards around the vehicle’s cabin. Since 2008, more than 16 million vehicles across the world have been involved in the Takata recall as a result of the problematic parts.

The latest lawsuit is the most recent of four in the U.S. that has been tied to the Takata airbag recall in Honda cars, three of which occurred in Honda Accords.

The latest lawsuit is the most recent of four in the U.S. that has been tied to the Takata recall in Honda cars, three of which occurred in Honda Accords. A fifth death has been reported in Malaysia. According to the Takata airbag recall lawsuit, while Honda had reportedly received notification of airbag-related injuries and deaths and had subsequently issued recalls, Honda is accused of neglecting to adequately warn vehicle owners of the potential dangers. According to the suit, eight severe injuries were linked to the airbags between 2009 and 2014.

Additionally, a Sept. 22 message from Honda to its dealers allegedly told the retailers not to contact customers about the issue because Honda did not have enough replacement parts to fix all of the recalled vehicles. In addition to several wrongful death and personal injury lawsuits, Honda, Takata and other automobile manufactures affected by the Takata airbag recall are facing more than 15 class action lawsuits from vehicle owners who claim that the safety issues caused the value of their cars to decrease.

If you own a vehicle that is affected by the Takata airbag recall or if you have been injured in an accident and you believe that the Takata airbag was to blame, Attorney Group can help you to determine whether you have a case. We can also connect you with an affiliated attorney who can file your lawsuit on your behalf and help you to seek the compensation to which you may be entitled. Contact Attorney Group for an evaluation of you case at no out-of-pocket cost to you.