Although generally considered to be one of the safest forms of travel, with an average of over 9 million flights occurring every year in the U.S. alone, commercial air travel still carries risks. With that many planes in the air, there is always the potential for a mechanical malfunction, pilot error or act of nature that, when combined with the speed and altitude at which airplanes travel, can lead to deadly plane crashes.

Below is a list of ten of the deadliest airline accidents in U.S. history. (Note that the September 11, 2001 terrorist attacks are not included in this list):

American Airlines Flight 191 was leaving O’Hare International Airport on a flight to Los Angeles when its left engine fell off, spiraling the plane into the ground less than a mile from takeoff. The American Airlines crash remains the worst non-terrorist aviation accident in U.S history, killing all 271 on board along with two on the ground. The National Transportation Safety Board (NTSB) reportedly found that two months before the accident, a shortcut had been taken in removal of the plane’s engines from its wing pylons for maintenance.

Just two months following the September 11 attacks, American Airlines Flight 587 crashed minutes after taking off from JFK airport in New York City. The plane, bound for the Dominican Republic, went down in Rockaway, Queens, when its tail detached in midair from turbulence left by another aircraft. The American Airlines crash killed 251 passengers, nine crew members, and five people on the ground. On December 20, 1995, American Airlines Flight 965 from Miami International Airport crashed into the side of a mountain on approach to Alfonso Bonilla Aragon International Airport in Cali, Colombia, killing 159 of 163 people on board. An investigation concluded that the accident was caused by flight crew error, and the crash reportedly prompted the requirement of terrain awareness and warning systems in transport airplanes.

Northwest Airlines Flight 255 crashed shortly after departure from Detroit Metropolitan Wayne County Airport after the plane stalled and struck a light pole near the end of the runway, severing part of the left wing and igniting stored jet fuel. The plane crashed into Middlebelt Road near I-94 in Romulus, striking vehicles as it broke apart. All but one of the 149 passengers were killed Northwest Airlines crash, along with six crew members and two people on the ground.

Delta Airlines Flight 191 from Fort Lauderdale, Florida to Los Angeles, via Dallas crashed on approach to Dallas/Fort Worth International Airport on August 2, 1985 after the plane was pushed downward by a microburst, or a small and intense draft in a thunderstorm. The Delta Airlines crash killed 136 of the 152 people on board, along with the driver of a car near the impact site. The NTSB reportedly determined that the accident was caused by pilot error.

A United Airlines crash occurred as a result of a mid-air collision occurred between United Flight 826, bound for Idlewild Airport, and TWA Flight 266, on approach to LaGuardia Airport. Reported visibility limitations brought on by fog and a miscommunication with the United jet and its flight tower caused the two flight paths to converge. The TWA flight crashed onto Staten Island after its fuselage was torn apart in the collision. One of the United jet’s engines was ripped from its pylon, downing the plane in Brooklyn’s Park Slope. A total of 134 people were killed, including all on board both flights and six on the ground.

US Airways Flight 427 was on approach to land at Pittsburgh International Airport on September 8, 1994 when it suddenly dove and slammed into the ground near Aliquippa, Pennsylvania, killing all 132 people on board. The cause of the US Airways crash was a reported rudder malfunction of which future flights were warned following an investigation by the NTSB. The number 427 is no longer used for flights in the US Airways system. 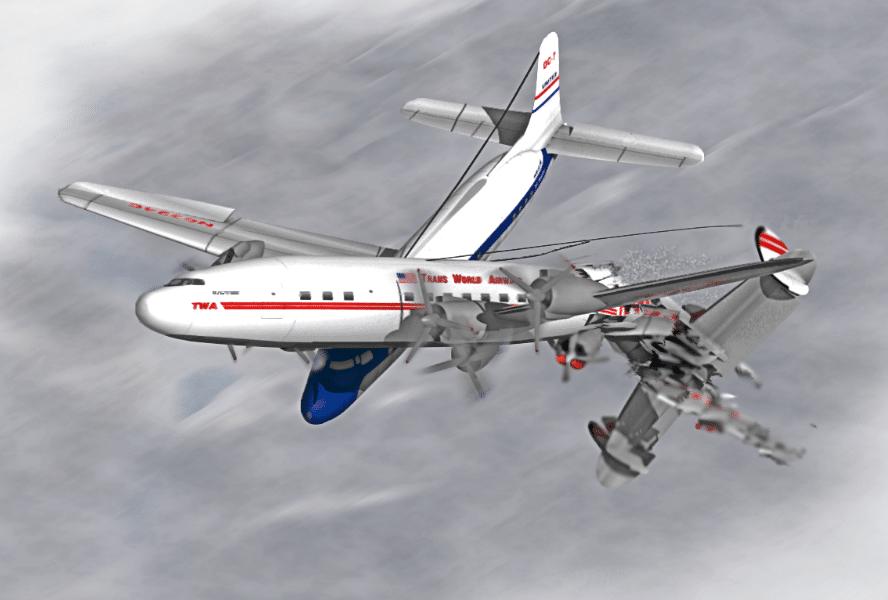 On June 30, 1956, United Airlines Flight 718 collided in midair with TWA Flight 2 over Arizona’s Grand Canyon, killing all 128 people between both flights. The planes failed to see each other in time to make evasive action, suggesting human error as the cause of the accident, but the Civil Aeronautics Board could not find a precise cause in an investigation. It was the first commercial airline crash with more than 100 fatalities, and inspired the creation of the Federal Aviation Administration.

On July 19, 1989, United Airlines Flight 232 suffered failure of its tail-mounted engine, causing complete loss of flight controls en route from Denver’s Stapleton International Airport to O’Hare International Airport in Chicago. The flight crew guided the plane to a crash landing in Sioux City, Iowa, where it broke apart and caught fire on impact. Of 296 people on board, 111 were killed in this United Airlines crash. During a regularly scheduled flight from Anchorage, Alaska to Seattle, Washington, Alaska Airlines Flight 1866 crashed into a mountain on approach to land for an intermediate stop in Juneau, Alaska on September 4, 1971. All 111 people on board were killed in the Alaskan Airlines crash, the first fatal accident for the airline. Following an investigation, the NTSB concluded the probable cause for the crash to be misleading navigational information of unknown origin.

On April 1, 2011, Southwest Airlines Flight 812 made an emergency landing at Yuma International Airport after the flight suffered rapid depressurization following the appearance of a 6 foot hole in the plane’s fuselage above the cabin. Although two of the 123 passengers on board suffered minor injuries, the plane was able to land safely and avoid a Southwest airlines crash.

A JetBlue crash was avoided on live television when Flight 292 en route from Burbank, California to New York City performed an emergency landing at Los Angeles International Airport following a malfunction of the plane’s front landing gear. After holding for nearly 3 hours to burn fuel and lighten the aircraft, the plane was able to land safely despite nearly destroying the front wheels and tires.

On March 29, 2007, an Allegiant Air flight G4-758 from Portsmouth, New Hampshire to Orlando, Florida also experienced a malfunction of its forward landing gear. The pilot managed to land the plane and avoid an Allegiant Air crash. None of the 157 passengers on board were severely injured, but the aircraft had significant structural damage. This incident was similar to the landing gear incident of JetBlue Airways Flight 292.

On November 23, 2009, Frontier flight 1539 from Omaha, Nebraska, came disturbingly close to colliding in mid-air with a United Airlines plane as the two aircraft were approaching Denver International Airport. Controllers gave the Frontier pilots an incorrect heading, according to reports, which put the jet in the path of the United plane. The two aircraft were just 200 feet above it and only a little more than a mile-and-a-half apart and closing quickly on each other. Pilots in both planes took evasive action, and a Frontier Airlines crash was narrowly avoided.

On October 15, 2013, Spirit Airlines flight 165, travelling from Dallas-Fort Worth to Atlanta, experienced an engine failure. Passengers report that smoke filled the cabin shortly after takeoff. The aircraft, with 145 passengers aboard, landed safely at DFW Airport, and a Spirit Airlines crash was avoided.